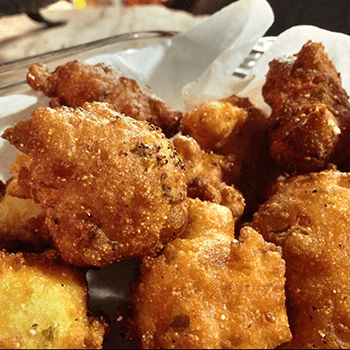 The first recorded reference to the word “hush-puppy” dates to 1899, and the dish most likely
originated with the original Indian tribes living in the South and Southeast.

Hushpuppies are a food with strong ties to the Southern United States, although they are available in many areas of the United States on the menus of deep fried fish restaurants. The name “hushpuppies” is often attributed to hunters, fishermen, or other cooks who would fry some basic cornmeal mixture (possibly that they had been bread-coating or battering their own food with) and feed it to their dogs to “hush the puppies” during cook-outs or fish-fries.

It is common to serve hush puppies along with fried fish since you already have a deep well of oil
heated for the purpose.

There are several variation printed on our packages. We also have pre-mixed Dixie Lily Hush Puppy Mix.

Mix all dry ingredients, add chopped onion, then milk and eggs. Drop by spoonful into deep, hot grease where fish are cooking. Drain on paper towels.

Mix meal, onions, salt, pepper and baking powder. Dissolve Baking Soda in milk and add to meal mixutre. Beat well and drop from spoon into hot fat and brown on both sides. Drain on paper towels.